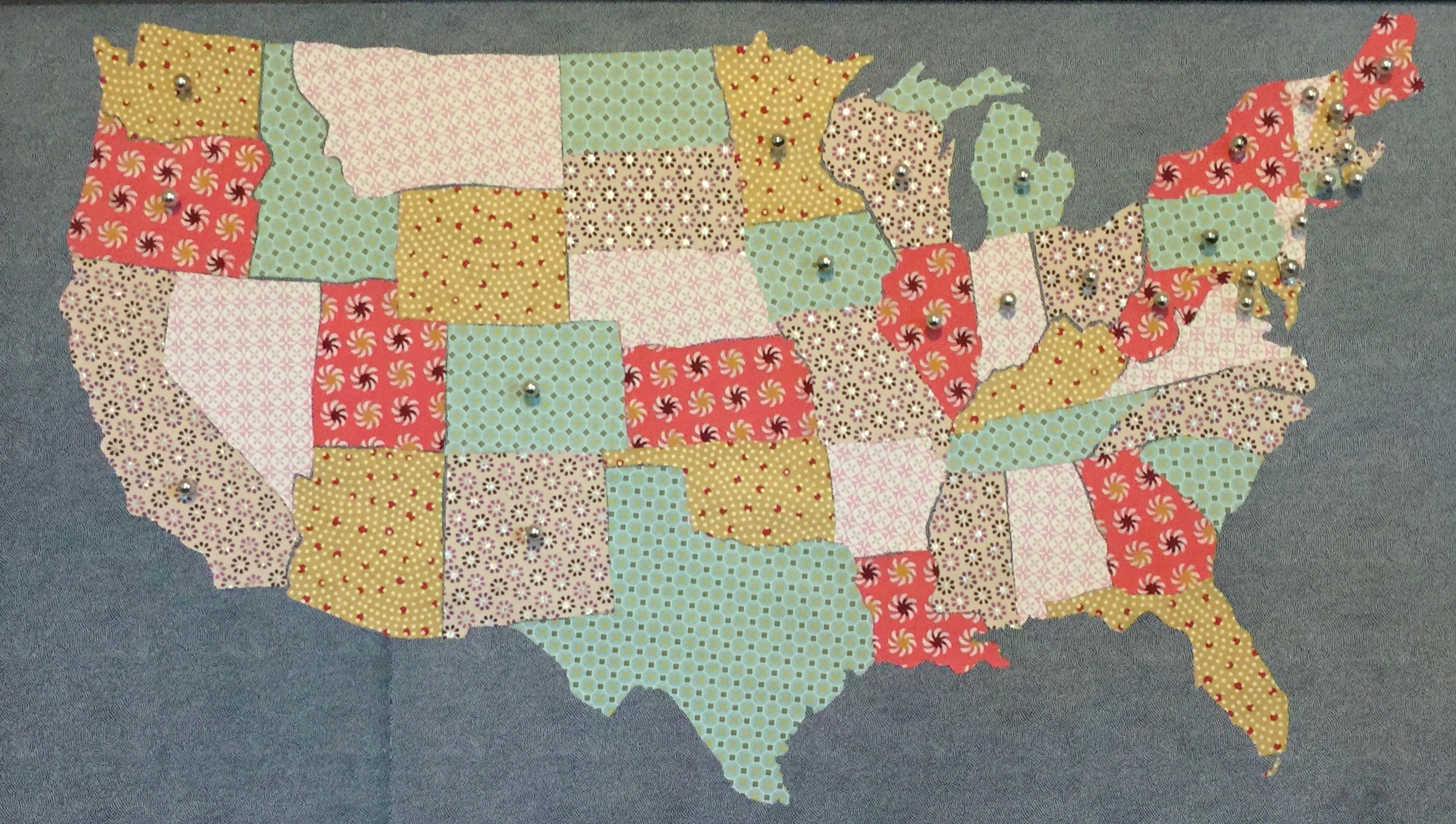 Wow. I started this project in February 2012. It’s now June 2016, this artwork has been on our walls for over four years, in four different homes, and I found this draft from 2/5/2012 and realized I’d never posted about this. Well, heck, it was mostly all written (with many facts I’d forgotten about – thanks for writing them, past-Andrle!), why not post it now. It’s still crafty. It’s still a map with pins I add as we head to a new state. It still doesn’t have Alaska or Hawaii. Ugh. Sorry, states. Here we post! The project: Creating an overly-artsy map of the United States.

The purpose: Track – in a cute and/or fun way – the states husby Nick and I have visited together. We may at some point add in smaller pins for the states we have been to separately – so the west coast doesn’t look so sad and empty! (And, update note, I plan to add pins for Theo, too. Hard to believe, but he was nowhere on the horizon when I first drafted this post!)

The time commitment: I’ll be honest, this project took much, much longer than I originally anticipated. It was still fun and exciting. But let’s face it. There are fifty states you’ll have to trace, cut, cut again, arrange, arrange some more, adjust a billion times, and then glue down. This all equals time. Additionally, I opted to order the frame from amazon.com, which meant a small bit of extra time waiting. (Update note: did we not have Prime for shipping? Or was I truly that impatient? I do not remember why I didn’t start the early steps while waiting for the frame – although what’s to say I didn’t?)

Step One: Select your paper.

This took me about thirty minutes. Those people more decisive than I will find it doesn’t need to take that long. I chose to get one type of paper for the background (a darker blue shade, slightly reminiscent of the sea). I’d recommend you then opt for at least five different papers/colors/patterns for the other states. A variety of papers means you shouldn’t end up having two states of the same material sitting next to each other. I found that it was doable with five – any fewer and keeping colors separated would be quite a hard task. Note: This is one of the steps that can take your project from cheap to pricey in a snap. I chose some fine papers from The Paper Source, located – literally – a stone’s throw from our apartment (in 2012! aww, I miss that apartment and its proximity to TPS). If you have various scraps of awesome paper, that’s a great way to go as well. Just make sure you have enough. After buying our paper, I realized that an origami set of paper could work really well too. You’d just have to check the scale and make sure larger states will fit on a sheet.

In any case, you should choose the paper that appeals to you the most. Since this is a project you’ll hopefully have on your wall for years to come (2016 note: yep!), you’ll want to use something that’s quality. At least, that’s how I justified it. And if you get larger sheets of paper, you’ll have lots left over for future crafts. Here’s a basic list of what you’ll need: pushpins, good adhesive (neutral pH), exacto knife or scissors, plain paper to trace the U.S. onto, tape, ruler, pen/pencil, tape measure, computer printer (or a projector!), coffee (optional), rubber stamp letters and ink pad (fairly optional, unless you want to be prepared for visits to places outside the U.S.).

First things first. How big do you want this project to be? How much wall space do you have? How small are you willing to go for states like Connecticut and Rhode Island and Delaware? I chose a 24″x36″ frame. And, since I was ordering it online, I measured out the size I needed in my working space to make sure it’s what I wanted.

You can use a frame (and some cardboard), but another option is to find a large corkboard/bulletin board. This was originally what I planned to use, but I didn’t find as good of options for these. So cardboard and glue it is.

Once you know the size you’re working with, determine how large you want the U.S. to be. I taped together sheets of printer paper – but if you have larger sheets of plain cheap paper, have at it. If you’re savvy and know how to get your printer to print out a large map on several sheets of paper, that’s a good way to get our outlines. If you have a projector handy, simply tape your outline paper on the wall, adjust the projector to the space and size you want it, trace the state outlines, and, voila! (Thanks to husby Nick for this idea). This step will take the longest.

Once you’re happy with the outlines you’ve drawn on your outline paper, choose a state and start cutting. I started with the East Coast because I figured it would be the hardest. And it pretty much was. It was also my sloppiest though, so perhaps I should have started with the (mostly) nice straight-lined states like Wyoming or Colorado.

My method was to cut out one or a few states at a time from the outline paper, then use the cutout as a stencil on the nicer paper.

Complete these steps for all 50 states.

Note: I already mentioned avoiding having states of the same color next to each other, so unless you don’t really care either way, here are more specifics. I sort of winged it until I got to the Mississippi river, at which point I decided to work my way west on the outline paper, indicating with abbreviations which states should be cut out of what paper. I also tried to balance what color the larger states would be, so places like Texas, California, Alaska, and even Florida, weren’t all the same. For me this meant taking that darker blue patterned paper and putting it down over the cardboard I was using. The frame I purchased came with a fairly thick cardboard layer that normally would hide behind the picture. It was perfect for gluing everything to – but if your frame does not come with a good cardboard layer, try finding a large box and cutting it to size. If you’ve purchased the frame online, no doubt it has arrived in a giant cardboard box, so you can cut and use part of that. I decided to also keep the plastic part of the frame (yours may come with glass) and put it behind the cardboard. In my mind it gave the piece extra stability – and it also stops the pushpins from extending beyond the cardboard layer. The piece of cardboard worked for me because I planned to use glue when sticking my pushpins through each state. If you think you might want to switch pins or move them around for some reason, this would not work as well. In that case – I’d strongly recommend finding a nice large bulletin board for your project. Or, find a roll of cork and put that behind your paper instead of the cardboard. Easy peasy.

Back to the background: I found that two pieces of the blue background paper were needed. Originally I planned to put the seam where Texas would come down, so less of it would be noticeable. But it ended up not working that way, which is fine. I also ran a sixth paper (unique design from what was used for any of the states or water) in about a six-inch strip along the bottom. This is where we plan to use rubber stamp letters to list places we visit outside of the U.S. (Update: we went to Cancun later that year, so you’ll see that flag in the more recent pictures!)

This part took me longer than I would have thought; but it’s absolutely important to know your states will align correctly BEFORE you glue any piece down. Make sure you like where it sits within the frame, make sure no states completely squish others, and make sure you have room for everything on your background paper. Even with some adjusting of the states a ridiculous number of times, things shifted during the gluing stage and I still managed to squish one of the states. You can probably tell, but let’s pretend you can’t. Which brings me to…

This will also take an hour or so… Also, you will have to adjust all your states about ninety more times. With each state you glue, rejoice that it no longer can or will be moved.

Step Nine: Bask in the beauty of your project, then push in some pins.

Like I said, if you add some glue to the sharp end of your pushpin, you don’t have to worry if you can’t stick it all the way in. The glue will hold the pin even if it’s only half-way in the board, and it gives some extra dimension as well. Keep plenty of pins around to add as you visit more places!

Step Ten: Hang it up.

Hurray! You’re all done. Now be sure you pack it well when you move three times after this (I’m talking to you, 2012 Andrle). (It was never messed up during a move, but it was tedious making sure none of the pushpins would be bumped off during transport.) So, all in all a fun project. And we really like the results. It is by no means a quick or even one-day project. I’d guess it was about 15 hours total spent. But sometimes the process is part of the joy of the craft. And don’t remind me that you can basically buy these sorts of maps already done for you, for probably the same cost of materials to produce. Hey, ours is one of a kind. ;)

One thought on “Crafty Project: Mapping the U.S.”