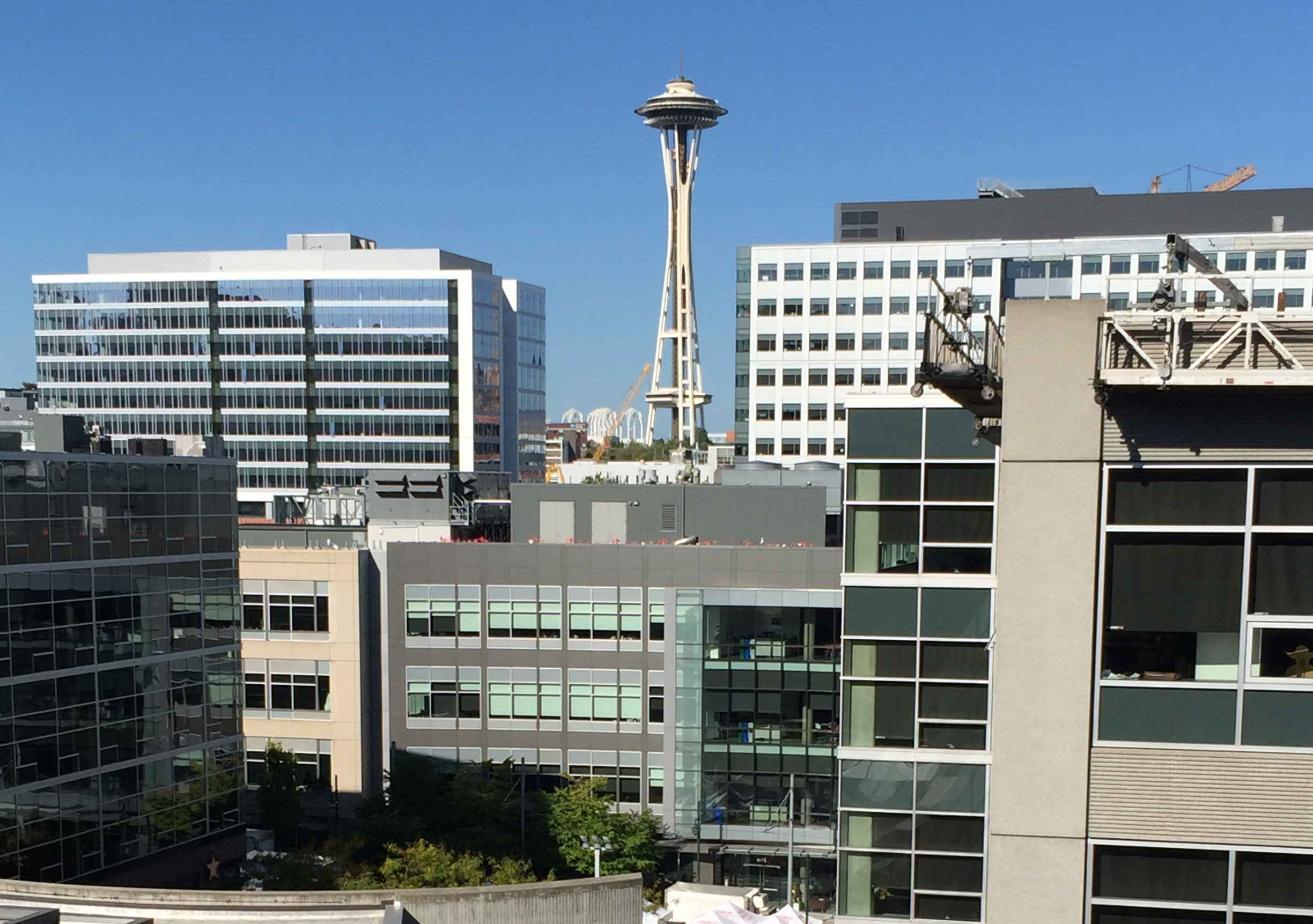 There have been some huge changes here in the land of Midimalism.

Firstly, a somewhat minor modification: midimalism.com is about to cease being its own entity. This under-used domain is expiring, and so shortly Midimalism will move to live under the blanket of LaNerd.com as a category/section – like its friends VegAndrle, Creative Writing, etc. It’s not a major change for those of you who have simply found your way here via a twitter or other such link. However, if you check Midimalism.com every day, anxiously awaiting my profound updates spouting genius ideas and helpful suggestions for paring down and finding balance with your possessions, (futile thus far as this is only the second post this year) you’ll have to change your ways. And your links.

The second, bigger change is our physical location. We have relocated three hours north to Seattle.

We’ve been here just under a week, but the process of getting here was mentally intense. We did what I called “downsizing in our 30s,” going from a medium-sized house in the suburbs to a two-bedroom apartment in the city. We lost easily about half of our usable square footage.

What might have seemed like a forced situation where we had to make our belongings fit into smaller square footage actually became an active decision to mindfully reduce our possessions. We could have put the extras into a large storage unit, saving these things for when we again have a large space to house them. Instead, we chose to reduce the items that we did not see as having a place in our lives – not just in this apartment, but in our next home, wherever and whenever that may be. We also made the conscious decision to not own a place as large our house was.

When we moved into that house just under 1.5 years ago, we had not attempted to downsize at all. All our items had just moved across the country less than a year before that, and I felt stubborn about keeping everything we had paid “good money” to relocate. We had also acquired many things during that year. As the truck (which we remember being either 25′ or 30′) backed into our driveway and the rear gate opened, it was packed to the max. I looked around our house, for which we had already bought a few additional pieces of furniture: a sofa and loveseat set; two tall, glass-door bookcases; a display case for decorative items; hefty storage shelves for our two-car garage. If we had changed our minds and decided to move away in that instant, everything we owned wouldn’t even remotely fit in that huge truck. I still remember how I felt when it hit me. We had a lot of stuff. Not only that, but I could see a future where we started to fill up our three bedrooms plus den/office as well as that two-car garage. And that terrified me.

In a time when most people would start acquiring, it became my mission to reduce. But as much as I hoped to have sparse rooms and empty closets, it never completely happened. I made progress during our 1.5 years in the house, which undoubtedly made our final paring down this last month-plus a bit easier. But you would never have been able to call us minimalists – or even midimalists. And although I was able to do some bursts of purging or selling throughout our time there, it felt odd to get rid of things that weren’t really doing any harm – even if they weren’t being used very often or ever.

When we made our decision to move to Seattle, it was bittersweet. I immediately went into planning mode. Where would we live? How much stuff would we need to get rid of? What about our car? Will it be hard to find a place that allows dogs? What can I get rid of right now? (There were other considerations not based on things or homes, but that’s for another time.)

It took a lot of planning. Once we found our apartment, I created a graph paper floor plan with to-scale furniture cutouts to get an idea of what would and wouldn’t fit in our new home. This helped us decide what would either need to be stored somewhere or what would have to go before we moved.

One marathon photographing and description-writing session later, I had posted the first sixteen craigslist ads. These were the easy things to part with – the ones we knew were either not worth moving or would not have a place in a smaller home. Then came the harder listings and/or the items we needed to use a little longer. We also took at least six packed carloads to our local donation center down the street. I listed larger items that were not worth selling and were too weird to donate on the free section of craigslist, and – remarkably! – got numerous hits. In the end, we parted with everything we listed, and only had to make one item free at the very end to get it out of our garage before the move. Fortunately, it was something we had used a ton and were only trying to sell for $20-30 anyway.

We ended up purging a tremendous amount in a relatively small amount of time. Since listing every item we sold or donated would be embarrassing, not to mention tedious and only interesting to me (which is why I have it recorded!), here are some of the highlights. By the numbers, in the course of this downsizing, we parted with:

The craziest thing is that were able to get rid of so many things and still have an abundance of remaining possessions. We parted with hundreds – if not thousands – of pounds of furniture, decor, and ball jars (yes, they’re their own category) fairly easily, yet all of those items used to take up space in our house and in our lives.

Thanks to all this downsizing, we are fitting pretty well into our new apartment. Not that we’re 100% settled yet, but it’s coming along nicely. Thanks also, in large part, to the generously-sized closets in this new apartment in both our bedroom and Theo’s. And yes, we are using the upper shelves of his closet for our games and puzzles. And did I mention we’re renting a 3.5′ x 7′ storage unit in our building? Our decision to buy a large artificial Christmas tree last winter is filling a good portion of that. But we have other things like our heavy-duty ladder, holiday tubs, etc. that didn’t make sense to get rid of until we know where we’ll be in the future. I originally despised (yes, despised) the idea of having to have a storage unit, mostly because I didn’t want to pay more money each month to house these things, but it is actually quite practical and means we don’t have corners of rooms that are unusable. I think of it as our garage storage that we didn’t quite downsize enough.

Where do we go from here? Tons of moves under my belt (this was the 27th move I’ve made or been a part of (as a kid) in my lifetime), it’s been hard to shake the habit of looking ahead and planning where we’ll be next. I’m not saying I’m anxious to leave this new apartment or to pack and to move again – not at all!! I just want to be prepared for the future, and I know that sometimes taking steps toward a goal (such as midimalism) is a slow process.

Looking at all our boxes sitting in our driveway as they waited to get on the truck last Tuesday, I had another moment of clarity. After all that work and stress, we still have a lot of stuff. But now Nick and I feel confident that we’re getting closer and closer to owning just the stuff we actually want and/or need. Perhaps during our time in this apartment we’ll make even more progress. In number alone (not taking into consideration weight or size) we own less than half the furniture we did a month ago. We didn’t reduce Theo’s things basically at all in order to make the move easier on him, but in a while we can start to look seriously at what he’s not using and may have outgrown.

This time around, in an attempt to keep our possessions from multiplying so easily, I turned to one of my favorite methods of listing and tracking: a spreadsheet. I am noting every new item we buy or bring into our home (not food, obvs, although we need to keep fewer dry goods on hand now). So far it’s been fairly mundane: Brita water filter, a padlock for the storage unit, furniture casters for our sofa and loveseat to keep our rented floors from getting damaged. Then I have a column for any items we will get rid of. Rather than looking at the totals alone, I plan to take into consideration the size and use of each item to see if we’ve reduced a somewhat comparable thing. For example, getting a king-sized headboard would not be balanced out by throwing out five pairs of worn out socks. But maybe those socks would cancel out the padlock. It’s ultimately not about nitpicking to the point of insanity, but about making sure I feel accountable for all new purchases as well as staying motivated to continue to reduce. And for the items we do get while we’re here, I want to not only be positive we love them, but positive they are flexible enough for future unknown homes and quality enough to last and stay with us for a long time.

It feels good to be back in a smaller place, not to mention SO fun to be living in a big city again. That doesn’t mean I’m not grateful for the time we were in The ‘Couve and for our beautiful house. In many ways it still feels strange to not be there. When we moved to that area and bought our home, we expected to be there for many years. We believed Theo would be going to the elementary school down the road. We made decisions to add blinds or hooks or yet another wall anchor based on the expectation that those holes in the wall would improve our home – for us. But now we have a chance to look forward and experience life differently than we had been since our son was born. And that’s more exciting than having a lot of extra square feet for stuff we were not using.