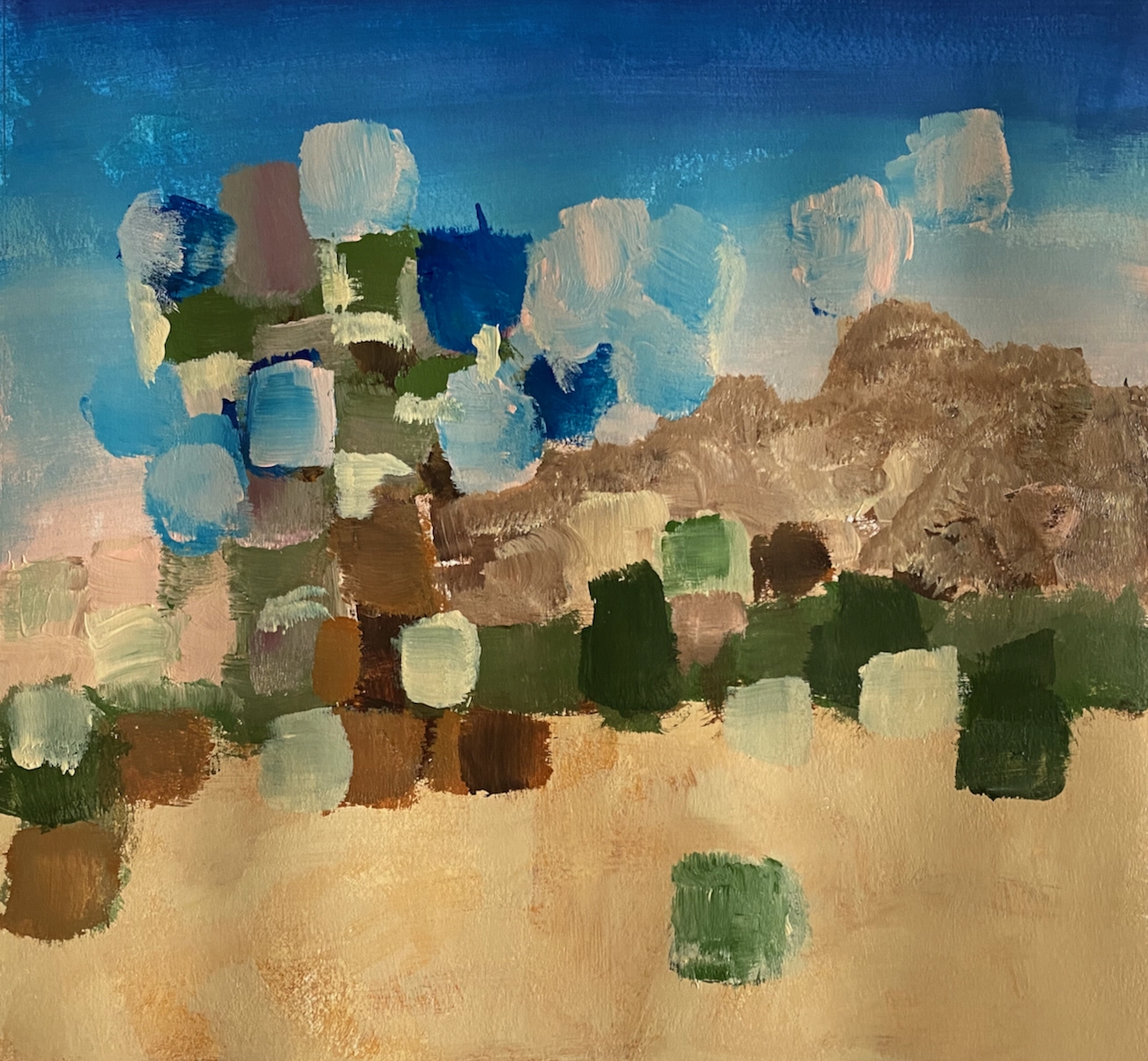 We had a fairly low-key holiday Monday. Our son did a ton of reading and worked on finishing a bee cross-stitch. Nick did a bit of reading and a bit of relaxing. And I spent a few hours exploring a new-ish creative outlet: painting. I am currently deep in the revision of a piece I’ve written that combines my love for the desert with my love for my father who passed when I was thirteen, and I wanted to explore some of these feelings through art. I thought perhaps by painting a scene from Joshua Tree Nat’l Park, which features in one part of my story, I would evoke an additional emotional response that I could bring into my written piece.

But after nearly four hours of mixing colors, adding shading, putting a color here and another color there, the only emotion I had evoked was frustration. I was so let down by my lack of artistic skills. The piece didn’t look perfect. It didn’t transcend all desertscapes ever painted. It looked amateur. Angry with myself, I tried to tweak a few things but was at a loss, not actually knowing what to do.

I decided to start over, attempting a smaller and more abstract version. Maybe realism was too much to ask, but surely I could put together something that didn’t have to be as precise. I blended some colors for the sand, some colors for the sky. It was fairly pretty. I added a Joshua Tree. It looked horrible. I *abstracted* more elements. I liked it a little better, but it was still off.

Refusing to be a bad artist, I decided my new destiny was to be a black pen sketch artist. Never mind that we somehow had no black pens that weren’t ballpoint, I pushed on with my quest to become an amazing purple pen sketch artist. I sketched, making little hashes and hatches and sketches and, well, I liked it. It was better. But it wasn’t something that was going to be on my application to art school.

The thing is: I am not an artist. I’ve never learned painting techniques. I’ve never gone into color mixing much beyond the color wheel. I don’t know how to shade or make a line that doesn’t look overly intentional. I don’t even know enough painting terms to use them properly here. Why did I expect myself to be able to bypass the actual learning process and years of practice and produce a miracle painting that I would love forever and hang proudly on our walls? Why was I sad that my pieces looked amateur when I am, in fact, an amateur?

I looked at the picture and imagined the people I know who are actual artists taking a look at it and thinking, “uhh, she should stay in her lane.” (They would probably not be that harsh.) What I was failing to acknowledge in that moment is that the pieces they produce now are in part due to their raw artistic talent but also the fact that they majored in art, went to additional schooling for art, and/or have been practicing art for years. I didn’t think I was going to make anything as good as what they make, but I also shouldn’t have expected myself to know how to do things I haven’t learned.

I have high expectations for myself as a writer as well. Here is a place where I did receive instruction, focusing on poetry in undergrad, taking a few one-off classes in Boston, and now expanding my writing skills in my current writing class. I have struggled with my inner critic time and time again. When I reread things I wrote in college, I enjoy some of them but other pieces make me cringe. When I look at what I wrote when I first set out to be a writer in the early 2010s, I find some of it interesting and much of it needing quite a lot of work.

As I refine pieces to send out to literary journals so I can get rejected get published, I am faced with many kinds of criticisms, the majority of them mine. I was fortunate to have two pieces published thus far. My first reaction was joy and excitement, my second reaction that I tried to bury deep inside was “oh no, what if this isn’t good enough? Now people will think this is the best I can do.”

The thing is, it was the best I could do. I had edited and revised and had gotten these pieces to a point where I was happy with them. Sure, if I continued to work on them for additional months and months, I could probably inject prettier language and more metaphors. But those pieces felt complete and felt like they wanted to be out in the world – and they were selected to be out in the world! If I look at them in a month or two months or a year, I may see things I would have done differently, but it doesn’t mean that a piece isn’t good or I shouldn’t have put myself out there. If I see things I would change or improve, it means I have grown as a writer. And I hope to grow as a writer for as long as I’m writing.

How sad would it be if every writer had to wait until they were the best they would ever be to put their writing out there? How stifled would our creativity be if we were just waiting for the best possible version of ourselves? I don’t mean that we should send out early drafts or things we haven’t tried our hardest on, but at some point, to greatly paraphrase something I heard Ocean Vuong say in a recent talk he gave at SAL, we’re just rearranging punctuation and replacing words. The work and meaning is already there.

Of course, some revision is necessary, and part of how we grow as writers is in that process. I used to think a writer was supposed to dislike revisions, but in the last couple years, I’ve started to embrace and truly love it. My first drafts are rarely sparkly beautiful creatures that shine on their own. It takes me many, many edits to get my diction and prose where I like it. And then I need to edit it again and again. Seeing even just one line or paragraph develop and turn into something I’m excited to share brings me so much joy.

I’ve realized in writing this post that I have an unrealistic expectation that, because I’m a generally creative person, I should be good at everything that falls into the category of “creative.” This extends to other things like cooking and minimalism. When we first went vegan, instead of having nothing to eat, a world of new ways of cooking and a variety of recipes opened itself to us. I had so much fun trying new recipes, and, because I was using Instagram to keep myself inspired on this new journey, I was taking photos of food and posting them. I played with the arrangement of meals on the plates, the lighting (often out of my control at dinner time in fall and winter in the PNW), varying the surfaces the dishes sat on. Some shots turned out wonderfully, some fell flat, but it was a fun thing I did for a least a couple years. I would rejoice when the meals were scrumptious, adding them to our recipe app and looking forward to making them again. But if they didn’t turn out? I blamed myself. When it comes to minimalism, I’m equally as critical. Instead of focusing on the joy that parts of minimalism bring me, I’m quick to look at what hasn’t been completed yet. I know that if people come into our home, the last thing they would assume is that we are minimalists. Which we’re not, so why do I hope they would think we are something we are not even aiming for? An awful lot of this self-criticism is anticipating the criticism of others. Maybe it’s time that stopped.

My writing isn’t perfection, but I will keep writing. Our home isn’t an Instagram-ready minimalism sanctuary, but I keep plugging away to embrace the parts of minimalism that bring me peace. And my art, well, it’s not winning any awards, but it is enjoyable and therapeutic and fun. No one has to be the best at everything. No one even has to be the best at one thing. Fulfillment doesn’t have to come from being the best, it can come from doing your best doing something you love.

As I go forward in creative endeavors, perhaps I can channel that pesky perfectionism into working for me, but only in as much as it serves my ability to craft something into what I see that it can be, not into driving myself mad nitpicking. I may not be able to do that with acrylics, but I can shape and craft with my words. And that, to me, is beautiful.